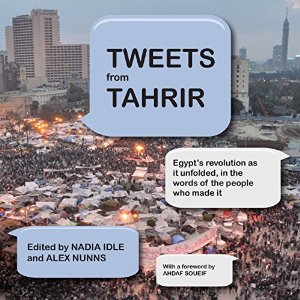 Five years ago I stood in Tahrir Square as one of the millions who brought down President Mubarak. The feeling then was that the world was opening before our eyes. The possibilities seemed endless. Famously, the events were reported in real-time on social media. The revolution may not have been powered by Silicon Valley tech tools as some in the West too lazily assumed, but the experience was shared with the world through those portals. I co-edited a book, Tweets from Tahrir, which collected tweets to tell the story of the revolution. A selection of them was printed in the Guardian — the world was eager to hear those voices.

But #Jan25’s bloom didn’t end in fruition; Few of Tahrir’s dreams were realised. If anything revolutionaries’ voices were muted in the months and years to come. The activists and ‘citizen journalists’ on Twitter, fluent in English and media-friendly, were only ever one part of the coalition that brought down the president. The spirit of their revolution lived on for a few years (a remarkable feat for a movement with little institutional base) but was ultimately overwhelmed by the organised strength of the Muslim Brotherhood, who were in turn overwhelmed by the military – which, it turned out, had never really been deposed.

On this anniversary, with Egypt back under the rule of an autocratic ex-general, I wanted to hear the voices of those original activists again. Was it worth it?

Was it worth it? And why?

@Salamander Of course!!! It was the best 18 days of our lives with all the fear and pain and agony, the sense of victory; of achievement. These are priceless feelings. But also it was worth it for what it entailed, that for one moment we all felt proud; we all stood up against injustice and united, we battled oppression. Would we have regretted not rising up at that moment, had we not? Who knows?

@Zeinobia Yes, it was because despite it not ending in the way we wanted – we do not have democracy or social justice – it still opened the eyes of many on the bitter realities. Taboos are being challenged.

Anonymous Tweeter 1* It was definitely worth it, because it ignited a whole generation’s revolutionary spirit to stand fearless in the face of a powerful regime. It was worth it because it was a pre-cursor to an ongoing struggle against tyranny, inequality and oppression that will continue as long as the core issues remain unresolved. Because the unsustainable methods used by all past regimes will reach a breaking point, and then the experience of #Jan25 will be priceless as we move along the learning curve in iterations, bringing us closer to the goal.

@Ganzeer Yeah, I think so. While we may not have totally succeeded in bringing down The Man, it is incredibly satisfying to see The Man frightened and scared and using everything he’s got to cling onto power. The Man, in this case, being the Egyptian military apparatus and its business cronies. Admittedly though, I also can’t help but feel heartbroken over the lives that were lost and the dreams that’ve been crushed.

@Gharbeia Totally. There was no chance of building a democracy in 2011. I wish I could find my February 2011 interview with the BBC when I said tonight is a party, tomorrow we have a military coup to deal with. The real goal I think was to break the binary between traditional authoritarianism and Islamism, and the way to do this was to create a crisis (it is the only thing we are good at) to throw the Islamists in power, then throw them out of it, hopefully quickly and peacefully. This was the analysis of a small group within Kifaya (pre-2011 grassroots coalition), and it is exactly what happened.

Anomymous Tweeter 2* Absolutely. Jan25 revealed how a united and determined populace can topple the Pharaoh and shake his throne to its foundations. It inspired the ordinary citizen to reclaim his/her rights, freedoms, streets, public spaces, and their country. However, the counter-revolution has basically triumphed. In terms of rights and freedoms in Egypt, we are now worse-off than we were under Mubarak’s dictatorship. The Rabaa Massacre – orchestrated by Sisi – is on a par with the Tiananmen Square Massacre in China. In terms of our rights and freedoms (since 2013) – it’s not like we are back at Square One. It’s like we are starting at Square Negative 100.

Anonymous Tweeter 3* It was worth it. Not because of the initial outcome but because it had to happen. It was bigger than any of us and it was going to happen anyway. I can only hope that people learn from history next time, but that may be too hopeful.

@MohamedAhmos Yes, because the people had their voice heard.

@Gsquare86 We fought, conquered, bled, cried, laughed, were imprisoned and tortured, but for a moment we were free and it was all worth it.

@TheAlexandrian Well, that really depends on your time horizon. Any wholesale societal shifts of the sort that we witnessed across the region five years ago will naturally involve a period of adjustment before a new equilibrium is reached. This period will naturally come with quite a bit of difficulty. Even in the region’s lone “success story” Tunisia, consternation and unease remain high. At any given point in recent years, one could look to the continued repression, economic stagnation, and security breakdowns across Egypt and conclude that all this was assuredly not worth it. Yet, without minimising the real toll felt by everyday Egyptians, what we are seeing is the growing pains that generally attend to the breakdown of authoritarian rule. It will likely take a generation to pass before we can meaningfully assess whether the current tumult was truly worthwhile.

@omareldeeb Well five years later I’m very disappointed at what we have become. We are losing more and more freedoms to military rule, and the educated youth are leaving the country for better opportunities elsewhere. I’m guessing #25Jan is at its worst state.

If you knew then what you know now, what would you have done differently?

@Gsquare86 I would do it all over again every single lifetime. Nothing to regret only lessons to grow with for what’s yet to come. It’s not over.

@RamyYaacoub There needed to be a plan, any sort of plan, I recall my enquiries about a plan to be drowned by calls for the complete bringing down of the regime. But, there was never a plan, and I would’ve wanted one.

@Ganzeer I’ve been vocal about the dangers of trusting the military since around July 2011, and my stance has not changed since. I wish I and others had made that realisation as early as January 2011. Maybe, just maybe, the outcome would’ve been different, I don’t know.

Anonymous Tweeter 2* I would’ve sought to avoid conflict & infighting with people in the same revolutionary boat. I would’ve worked harder to organise with others to make #Jan25 a more effective & sustainable popular revolt.

@Zeinobia Not much. I would have participated and covered it. The only difference now is that the blind trust and innocence we had during then will be replace with political realism.

@Gharbeia Not much. Things are going OK given where we started from, aren’t they?

What are your hopes for the future?

@TheAlexandrian My hope for the future is simple: that #Jan25 is regarded as a means and not an end. That it not be relegated to an annual event in which we patronisingly ‘celebrate’ the Egyptian people, but rather recognise it as the opening salvo in a long struggle to establish an Egypt that all its citizens can celebrate and take part in. If this general ethos abides, then I have faith that all the specifics we wish for will have their due chance to come to fruition in time.

@Gharbeia That we build that movement before it is too late. We are facing an approaching perfect storm: worldwide structural crises and an unsustainable regime. We need to be ready before it falls apart, and it will.

Anonymous Tweeter 1* my hopes for the future are for Egypt to circumvent the bloody rebellion and all out conflict that appears to be the path it is on. To have a military that understands this threat and checks itself giving the space for civilian rule to dominate the political spectrum. We need technocrats in place strategising for an economy that reduces the recruiting power of extremist groups and utilising the resources of the country in a transparent and sustainable way.

Anonymous Tweeter 2* I hope for a revolution that will effectively safeguard the goals of freedom and social justice – against all opportunist politicians, against corrupt judges, against thieving businessmen, and against bloody generals.

@RamyYaacoub My hopes have been curbed, or in other words, adjusted to reality. 1. I hope for the end of torture in police stations; 2. I hope for some, consistent, economic reform/growth; 3. I hope that some political structures/organisations to be allotted the space to grow to give room for future generations to develop the necessary skills to create/implement real and positive change.

@Zeinobia I hope that for the sake of those who died, were detained and injured during not only those 18 days but those 5 years, we achieve the goals of #Jan25 and start a true civilian secular democratic transition that will save the future generations in Egypt in the future.

@Ganzeer Same as day one: bread, freedom, and social justice.

* Three activists asked not to be identified.

Tweets from Tahrir, edited by Nadia Idle and Alex Nunns, is published at £8 in paperback and £7 as an ebook. Available from orbooks.com

This piece first appeared in Red Pepper on 25 January 2016